Journey is a PlayStation 3 and PlayStation 4 game by thatgamecompany, that is distributed over PSN and was released on March 13, 2012. The player plays as a robed person journeying towards a distant mountain through a sandy desert. The game has a multiplayer component, in which players can interact on their journey and assist each other. As of May 29th 2012, it has become the fastest-selling PSN game ever.

The players take the role of a robed figure traveling through a desert towards a large mountain. The player is not given any instructions on how to play the game or what the game's goal is, nor any map of the game's world.

There is no spoken dialogue besides the chirping call of the player, and the cutscenes are shown without any words. It is up to the player to interpret the storyline of Journey, leading to many theories as to what exactly is taking place.

If the player is playing online, they can encounter other players while on their way, called companions. However, players cannot speak to each other (neither via voice nor text), nor are identified by any username, gamertag or avatar. They can communicate only via a wordless shout, and have symbols on the front of their robes, so players can identify whether they have already encountered a given fellow traveler or not. They can, however, assist each other.

According to the game's designer, Jenova Chen:

"It's about two strangers who meet online. They don't know who they are or how old they are. All they know is, that it's another human being."

Items that players can find in the desert include pieces of cloth that they can fly on for a short period of time. There are also magical items and ruins including Glowing symbols, Ancient Glyphs, and Cloth Creatures. Easter eggs from other thatgamecompany games are a Hidden Desert Flower and a Mysterious Creature.

Journey Collectors Edition is the first retail disc release for thatgamecompany. It features Journey as well as the studio's previously released flOw and Flower and more. It was released August 28th, 2012 for the PlayStation 3. 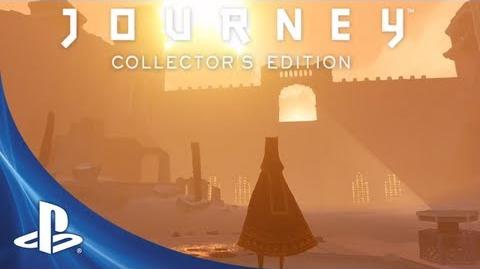 Journey received critical and commercial success worldwide. After its release, it became the fastest-selling game to date on PlayStation Store in both North America and Europe.[1] Review aggregator Metacritic scored the game at 92/100 for both PS3 and PS4 versions.[2] [3] Most critics praised the visual and auditory art direction, IGN even described the game as "the most beautiful game of its time",[4] while Slant community collectively agreed that the game offers a simple but really enjoyable gameplay.[5]

19 people participated in the creation of the game.[7]

Community content is available under CC-BY-SA unless otherwise noted.
Advertisement